I awoke at 3am on Tuesday and realized he wasn't there. The guy who sleeps on me every night was not there. No, not that guy, the man I have been married to for almost 13 years, he was next to me;) but my kitty cat, Legolas was not on me. For some reason, like a mother's instinct I knew something was not right. I could have just rolled over, figuring he was wondering the house, but I did not. I got up. I called for him. He did not come. I checked the kids rooms, because if he was in there then he would wake them up and he would be in big trouble. Nowhere, he was nowhere. I knew that somehow he must have gotten out of the house.

That scenario was not a good one as he is an indoor cat, declawed and never allowed outside. I know that this sounds crazy, I mean, he is just a cat.... but I was really upset.

When we got this cat, I really really did not like him. In fact, I half wished he would run away. We found him on a local website. We were searching for a kitty. This guy, well, we were told he was a she, and her name was Peaches. Such a sad story, this was 6 years ago, when a lot of kids here in Arizona were dying of the flu. Well, a family had lost their 3 year old son, and Peaches was his kitty. Everyone else in the house was allergic to cats so they no longer wanted him as his owner had died. So sad, so we went and picked him up. I suppose I would have taken him anyways, but I never even thought to check to make sure it was a girl. I got him home and as he walked around the house I realized that is not a girl!!! So we changed his name to Legolas (yes, after Orlando Blooms character in Lord Of The Rings!) And true to a male cat, he sprayed! And sprayed, and sprayed!! I could not stand this damn cat! But to see him with my daughter, you could tell that he was mourning a child. I could see him bonding with Ashlynn and he loved her in a way I had never seen a cat love a person. Then he started loving me like this. It had gotten to a point where he sleeps on me, every single night. Sometimes it is annoying, but mostly I love it now!

I had to work on Tuesday, but on my lunch I came by the house and searched for him. Nothing. I went outside and searched all around the house, nothing. When I got home from work, I went for a walk around the neighborhood to find him, nothing. I had gotten to a point where I realized he was probably not coming back, as he has never been gone before.

I was up most of Tuesday night, partly because I have been suffering from a bit of insomnia lately, but mostly because I was listening for my kitty, just in case he came home. The whole night passed and nothing. Nothing, until 5am!!!! I could just barely hear it, but hear it I did!! I could just make out a quiet crying from outside! I threw on some clothes and ran out to get him. It took a little coaxing, but finally my white cat... no wait, now he looks a little brown after his outdoor excursion... to come inside!!

Yes, he is home, back to sleeping on me. All is right with the world, at least when it comes to my pet world!! And me? No longer feeling lost without my kitty!!! 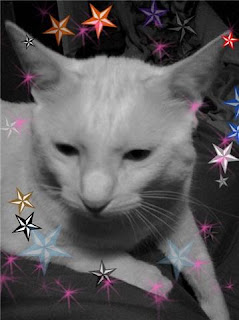 Posted by Patty mcmommy at 6:51 PM